It is the impacts in life we remember, not the details. The fact that I dont remember my age but only the picture of the first Morgan is exactly what I am talking about. I knew afterwards very strongly, I wanted one. It was an easy dream to have, since I would probably never get one. Until one day I was standing in front of a 4-4, which I could afford. That was the end of a dream, a dream which I sometimes miss. I did own my first Morgan.

Launched at the 1950 Earls Court Motor Show, the Morgan +4 was a more powerful version of the venerable 4/4, Morgan's first four-wheeler which had made its debut in 1936 (as 4-4). Built on a strengthened and slightly lengthened 4/4 chassis, the +4 was the first Morgan to feature hydraulic brakes and initially used a Standard Vanguard 2,088cc engine driving through a Moss 4-speed gearbox. In 1953 a higher performance version was available using the excellent Triumph TR2 and TR3 1,991cc engine. Now with 100bhp on tap it could sprint to 60mph in 9.3 seconds with a top speed a whisker over the magic 100mph limit.

The highlight of the Plus 4's career was undoubtedly its emphatic victory in the under two-litre class at Le Mans in 1962 driven by Chris Lawrence and Richard Sheppard-Barron. A stupendous achievement considering that the car was driven from London to take part, ran night-on faultlessly for 24-hours averaging a a little under 100mph for the entire time (including stops!) and then, as money was in short supply, driven home after the race.

Available with either two- or four-seater coachwork, it was a viable competitor to rival offerings from Jaguar, Riley and Alvis and remained in production until 1969 during which time 3,642 examples of all types were sold (although, in true Morgan style, the Plus 4 was relaunched in 1985 and is still available today). As a special order (the factory didn't really like making them much as they were complicated and therefore quite disruptive), the customer could order a Drop Head Coupe version which had a much more civilised body with large rear hinged doors, coachbuilt screen pillars and a more substantial hood. In 1954-56 a four-seat version was also available.

The production of + 4 four seater drop head coupes is well documented in various sources, and the total production is 51 cars. The factory lost money on everyone of them due to the more complicated body style and interior. This was what eventually led to the production stop in 1956.

Cars for the home market (UK) were fitted with the Standard Vanguard engine, export cars with the Triumph TR2 engine. Their respective numbers were 29 and 22. Most export cars found their way the U.S.A., one each going to Australia and Belgium, two to Spain. Despite the fact that it was not exactly a beloved model, a surprising number still have survived.

After World War II Morgan had re-introduced their 4/4 model fitted with a 1267 cc Standard engine. This continued in production until 1950 when it was replaced by the larger Plus 4 announced at the 1950 Earl's Court Motor Show. The Plus 4 at its introduction was fitted with a 2088 cc engine based on that used in the Standard Vanguard, installed on a strengthened 4/4, chassis with a wheelbase lengthened by 4 in (102 mm). Hydraulic brakes, at first all drum, were fitted for the first time on a Morgan. In 1953 a higher performance version was announced with the 1991 cc I4 engine as used in the Triumph TR2. The radiator grille was now surrounded by a cowl that blended into the bonnet. Front disc brakes became an option in 1959 and were standardised in 1960. From 1962 the engine was the Triumph TR4 unit, which increased displacement to 2138 cc. In 1955 the less powerful 4/4 model re-appeared in phase II form. The 96 in (2,438 mm) wheelbase of the Plus 4 was adopted by the 4/4 when it reappeared in 1955, after which the two cars were for most purposes the same length and width.

On display at the official Morgan stand the very unofficial Morgan +4 Ashley Sportiva Coupe developed by the then Swiss Morgan Importer. The Automobil Revue reporting on the Coupe in issue 12 in 1962, had a photo and a brief companying text about the car, which was called the "Morgan Gran Tourismo".

Body Styles.
Body styles available were a 2 seat sports, 4 seat sports and more luxurious 2 or 4 seat drophead coupe (4 seat coupe 1954-1956 only). One of the interesting quirks of the Plus 4 was that the engine cowling fitted so closely to the engine that there was no room for an air filter. Some owners stretched cheesecloth over the carburettor as a field-expedient.

In the 1970s the model started to be recognized as special and collectable. A special "club" was started for owners of these cars: the Morgan +4 4-seater Drophead Coupe Society. This was initiated by the late Canadian Doug Price. The club magazine was not really a very serious matter, as it was full with jokes about the cars and their owners. The model was dubbed the "Snob Mog", i.e. the Morgan for snobs. This name has stuck within the international Morgan community as being the "recognized model name" and nowadays everybody refers to the model as such.

The few very early SnobMogs (pre 1955) got produced with a flat radiator which was standard for all +4 at the time. Morgan did however do a design change in the front of their cars during the years the SnobMogs were produced. The prototype and some of the early cars were designed and produced in the era of flat rad - high cowl - twin spare cars. One SnobMog were built in the interim cowl time, but all of them were factory refitted with the more modern curved cowl.

The pictures above from left to right, show the change in the front of the Morgans which took place in the time where the SnobMogs were built. From left to right there is a Flatrad, interim, transition (high cowl, low lamps) before the last which is the cowl which Morgan ended up on the late 50's cars.

The main difference between the 2-seater and 4-seater Drop Head Coupe, when one disregard the obvious two rear seats, is the rear boot. The SnobMog is the only classic Morgan to ever been delivered with one. Morgan cars have always had a spare tire or spare tires mounted in the rear. The cars are very light on the tail, and the wheels come handy when you want to accelerate quickly adding weight and grip to the surface. The comparisment of body differences are done with the early flatrad twin spare two seaters since all SnobMogs were designed in the same time. The 60's 2-seater DHC rear end can be seen further down, where the single spare wheel in more enclosed into the rear of the car. 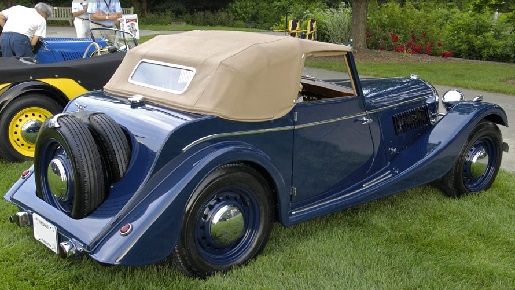 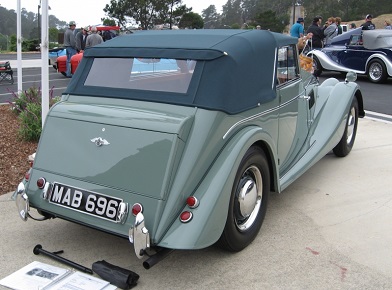 The difference of the rear of the car is very visible on the pictures above. The two-seater to the left, whereas the 4 seater is to the right. The 4-seater SnobMog have one spare tire hidden inside the boot. Very conventional for a Morgan, almost untraditional. 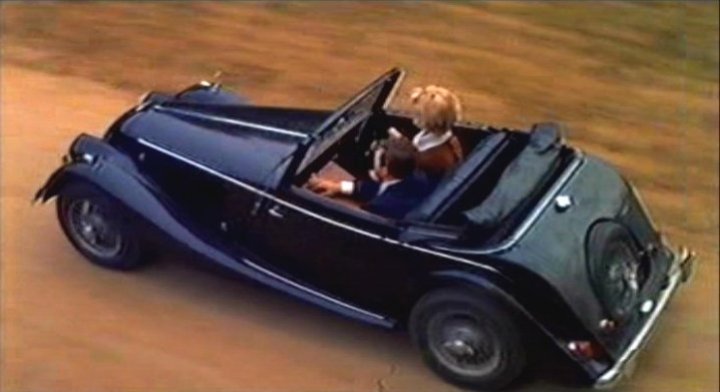 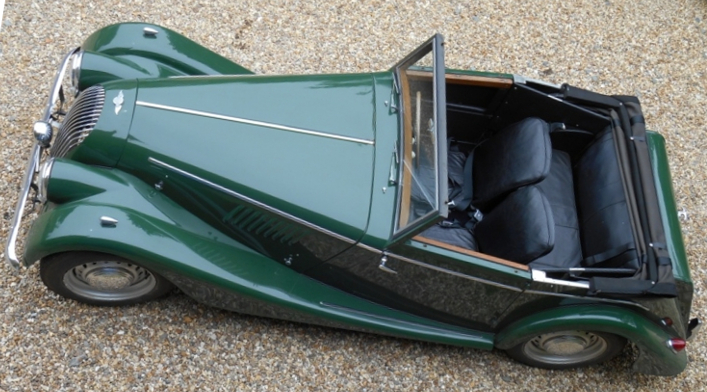 The real difference, and perhaps also the usability of these cars are visible from the top and down. The two rear seats can be used for passengers but also provides excellent luggage space with easy access. The 2-seater and 4 seater share the same frame which was derived from the +4 frames of its time. Visible both cars are very similar in the front, the difference between them are mostly in the interior and rear end of the car. Doors are longer on the 4 str version, so also the side windows which stick out ever so slightly from the end of the door giving rear passenger better view. The hood frame bows are also quite different and practically no parts from the scuttle and backwards will fit from the 2-seater to the 4-seater. In fact the 4-seater DHC share seat arrangement from the 4 seater roadster of its time. 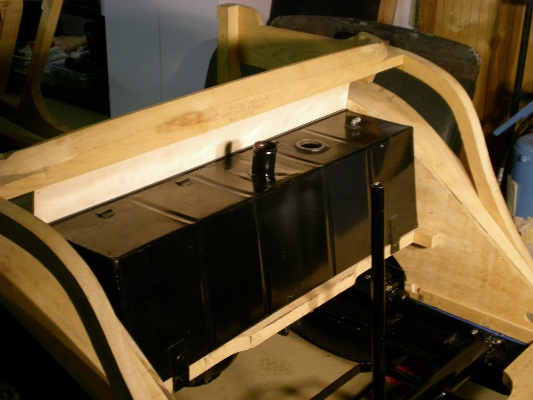 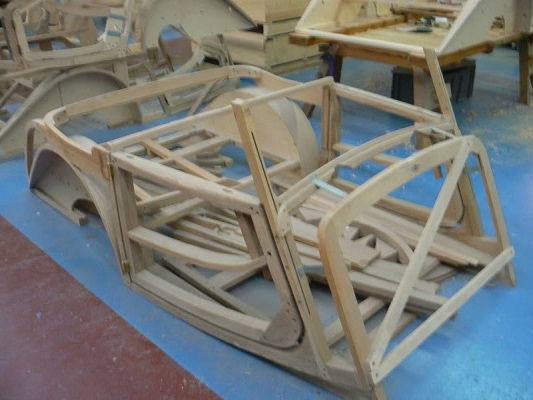 The SnobMog (and two seater DHC body frames) are rather complicated to produce. Harpers Morgan was able to deliver a SnobMog wooden frame for a few years ago, but the Morgan Motor Company are also building frames for the Snobmog. Looking at the wooden frames above, the design of the rear end od them is very different between the 4 seater and the 2 seater. They are both made of cured ash, the wood of which Morgans always have been built.

There is one "SnobMog" which also is worth mentioning, and that is the 4 seater DHC which Harpers Morgan did build one-off on a +8 chassis. Bob Harper did build 2 DHC based on the +8 chassie in the 1990s, one two seater and one 4 seater. Both cars were eventually sold to the Netherlands and is used occasionally. 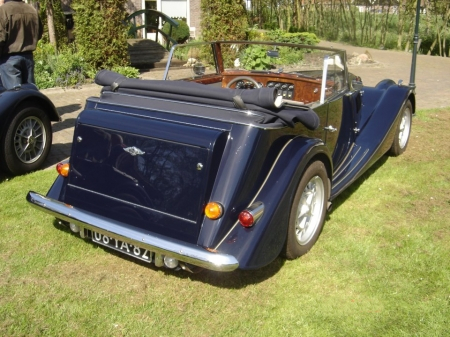 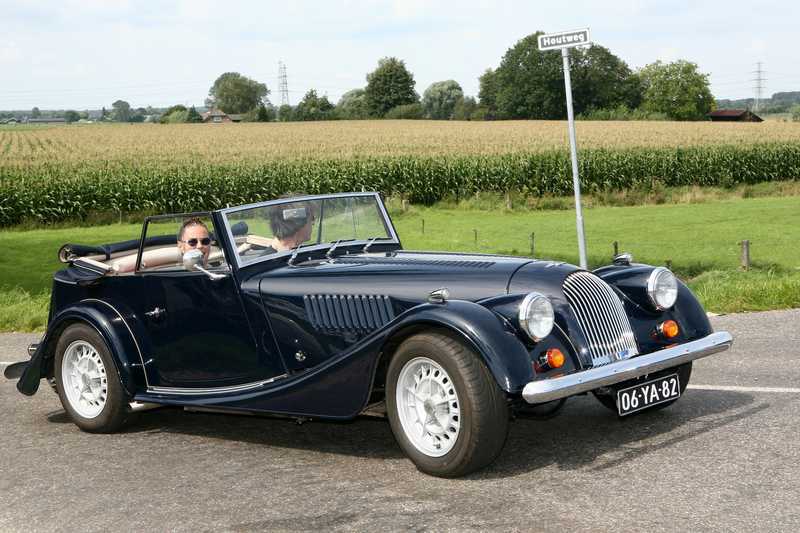 The 2 seater DHC was said to be the most successful design of the two, but I think this 4 seater DHC looks the business too. Beeing a 4 seater DHC, it somewhat deserves a place among SnobMogs. After all these cars were considered as prototypes built in cooperation with the factory at the time.

Here is a list of the cars which were made

And with as many pictures of the cars as I have been able to collect over the years. If you have pictures or info where this list is incorrect or incomplete, please do not hesitate to send me updates in order to keep this list as complete as possible.

Information sourced from various sources including https://morganhistoryinfo.sharepoint.com , http://www.morganville.org/ and public posts on facebook. If anyone claims ownership of these images, just let me know, and I will remove them.